Diabetes is recognised as the world’s fastest growing chronic condition. The number of people with type 2 diabetes is growing in each country. In 2013, diabetes caused 1.5 million deaths globally. Higher blood glucose levels also caused an additional 2.2 million deaths, by increasing the risks of cardiovascular and other diseases.

World Diabetes Day is celebrated on November 14 each year. This day engages millions of people worldwide in diabetes advocacy and awareness activities in response to growing concerns about the escalating health threat that diabetes now poses globally. 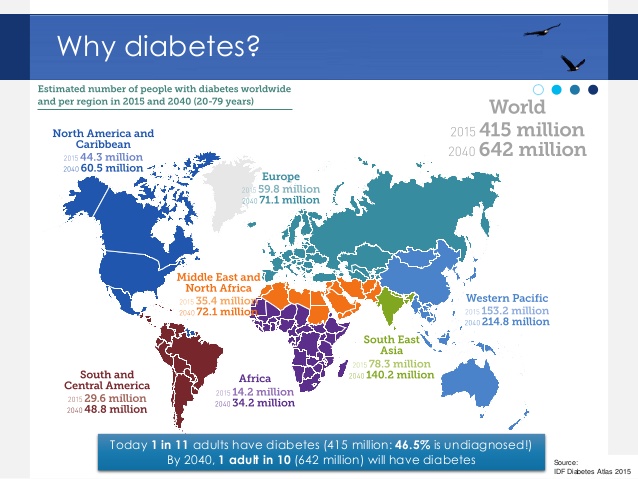 In 2015, the 7th edition of the International Diabetes Federation’s (IDF) Diabetes Atlas estimated that:

37 per cent of all adults with diabetes live in the Western Pacific region (which includes Australia);

The Western Pacific also has the country with the world’s highest prevalence of diabetes – in the Pacific Island nation of Tokelau where 30 per cent of adult population has diabetes. Cambodia has the lowest at per cent.

Diabetes in the Regions

WDD is the world’s largest diabetes awareness campaign reaching a global audience of over 1 billion people in more than 160 countries. The campaign draws attention to issues of paramount importance to the diabetes world and keeps diabetes firmly in the public and political spotlight.

World Diabetes Day is an international event to raise awareness about diabetes, celebrated every year on 14 November.

Diabetes Voice is the quarterly magazine of the International Diabetes Federation (IDF). It covers the latest developments in diabetes care, education, prevention, research, health policy and economics, as well as themes related to living with diabetes. Diabetes Voice goes to the heart of issues that are crucial to all those who can further the promotion of diabetes care, prevention, and a cure worldwide.