Diabetes is recognised as a National Health Priority Area due to its significant contribution to the burden of chronic illness in Australia. Type 1 diabetes (T1D), unlike Type 2, is a degenerative autoimmune disease. Despite significant government investment there is currently no reliable data on either what prevents or causes T1D. Around 140,000 Australians live with T1D. Considering half of all T1D are diagnosed before the age of 18, it is an issue of considerable concern for young people. 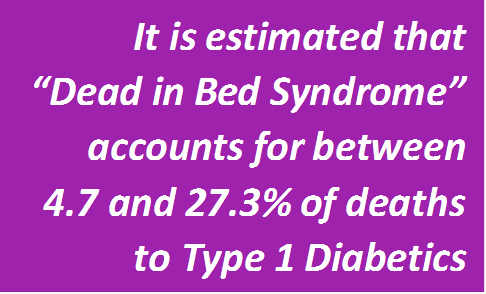 As such there is a compelling argument to assist T1D during childhood and adolescence as a preventative measure of both costly morbidity and ultimately mortality.

Hypoglycaemia, at the very least, is disabling and, at worst, can be fatal. In affected individuals, severe hypoglycaemia and its consequences (e.g. seizure, coma) can occur anywhere and anytime without warning.

Indeed, a particular devastating outcome in (typically) young people, for which severe hypoglycaemia is implicated, is sudden unexpected overnight death called “Dead-in-Bed” syndrome. It is estimated that “Dead in Bed Syndrome” accounts for between 4.7 and 27.3% of deaths to T1D’s. In real terms this means anywhere between 7,000 and 28,000 Australians go to bed every night not knowing if they will wake the next morning. The number of parents and close family members constitute many thousands more, living with the daily dread.

The financial cost to the Australian taxpayer is also significant. While the direct cost of diabetes is estimated at around 1.7 billion; the Australian National Diabetes Strategy estimates the full cost of diabetes may be as high as $14 billion, and includes reduced productivity, absence from work, early retirement, premature death and bereavement.12

For some T1D’s, CGM technology has the capacity to save lives and significant costs to the health budget. This includes people with severe hypoglycaemia who also suffer from impaired hypoglycaemic awareness (hypo unaware), women with type 1 diabetes planning for and during pregnancy, and adolescents aged 12 to 25.

Diabetes Australia estimates around 10,000 people (approximately 8.5% of the T1D community) are likely to fall into this category. Based on international experience, around 40% of T1d’s will actively seek or utilise CGM. This is reflected in our submission and is the basis of seeking access for a minimum of 4000 Australians (only 40% of the at risk community) and only one thirtieth of the entire T1D population.

CGM technologies have been approved by the TGA and available for sale in Australia for 15 years. Uptake and use is very low due to cost. At present there are no Government or private health subsidies or affordable access schemes available for CGM sensors.

The annual cost of CGM is approximately $4,000 per person as outlined further below, so this vital technology is too expensive for most people and families with type 1 diabetes. Importantly Young Australians are unable to access the life-saving changing benefits of this technology. The health system is also unable to benefit from the potential savings of wellness through the advanced management associated with CGM.